Today is Earth Day, set aside since 1970 to recall our connectedness to the earth and to call us to respond to the threats to the integrity of creation.

St. Francis of Assisi has often been invoked as a patron of ecology because of his love of all creation. He preached to birds and fish; he rescued worms from pathways; he established a truce between a wolf and the people of Gubbio.

Julien Green, in God’s Fool: the Life and  Times of Francis of Assisi, wrote of Francis’ mystical stance before the created world:

Francis glanced around him like a lover who is forever wonderstruck.

But there is another element of Francis’ spirituality that would help us to foster an ecological spirituality: his kinship with all creation. This can be seen most clearly in his Canticle of the Creatures, he praises God through all creatures.

Francis has definitely moved beyond the dominion theology that sees the human person as the lord of creation, over it, with power to do what he wants. This theological approach dominated Christian thought for centuries and still is strong among those who see humans as above nature with unlimited power to do what humans want.

Francis also has moved beyond a more recent stewardship theology that sees the human person as the steward of creation which he has to care for, in responds to God’s command. Stewards see themselves in charge of nature, even if it doesn’t belong to them. In this model we humans are not dominating nature but we are the caregivers in charge of the garden of creation.

But Francis sees himself and all humans as within creation. We are part of nature, with our special part in it, as all beings also have a part in the created universe.

And so Francis praises God for Brother Sun, Sister Moon, Sister Mother Earth. We are interconnected, part of the web of life, of creation.

When we see ourselves as part of creation and nature, we can respect all creatures and recognize their part in the wonderful work God has made.

This will need humility, recognizing that we too are made of humus, earth. As the last line of Francis’ Canticle says:

Praise and bless my Lord, and give thanks, and serve him with great humility.

And so this earth day, let us remember that we are part of the beautiful creation that God has made. Let us rejoice in our God who has made us all to rejoice in His love, to wait with all creation, eagerly longing “for the revealing of the children of God.” (Romans 8:19).

And let us love God and love and cherish all that God has made as our brothers and sisters.

This entry was inspired by the essay “From Stewardship to Kinship: A Franciscan Understanding of Creation” by Fr. Dan Horan, OFM, in his anthology of essays Francis of Assisi and the Future of Faith.

The image in the photo is on the wall of the friary attached to the church of San Damiano, which can be seen as one walks down from the town of Assisi to the church.
Posted by John (Juancito) Donaghy at 6:43 AM 3 comments:

On Sunday, April 7, Pope Francis visited the Basilica of St. John Lateran for the first time and was officially “enthroned” on the chair – the cathedra – of the diocese of Rome.

The basilica was originally and officially called the Archbasilica of our most holy Savior, and later dedicated to St. John the Baptist and also St. John the Evangleilst. The church and the palace were first on land given by Constantine. It has been rebuilt and restored several times. the popes lived there until the 14th century.

I visited the basilica in February this year and found it a much more prayerful place than St. Peter’s. It helped that I arrived just in time for a Sunday morning Mass. 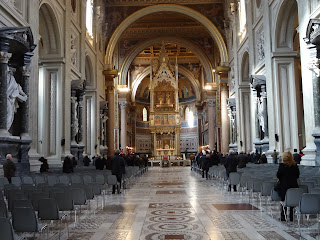 Though St. Francis would not have seen any of the present buildings he is present in art and in the history in and around the basilica.

About 1209, Francis went to Rome, probably with all his first followers, to get permission from the pope to continue their way of life based on the Gospels.

The pope, according to some accounts, had a dream in which the Lateran Basilica was falling down and a brother was holding it up. When Francis appeared, the pope recognized Francis as this man and verbally approved their way of life.

As Benedict XVI once said:

In [Pope Innocent III’s dream], he saw the Basilica of St John Lateran, the mother of all churches, collapsing and one small and insignificant religious brother supporting the church on his shoulders to prevent it from falling. On the one hand, it is interesting to note that it is not the Pope who was helping to prevent the church from collapsing but rather a small and insignificant brother, whom the Pope recognized in Francis when he later came to visit. 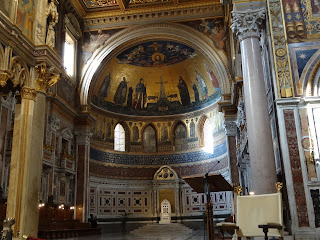 And so in the mosaic in the apse of the basilica you can see a small image of St. Francis.

But what really moved me is the sculpture of Francis and his companions which faces the Lateran. Erected about 1925 to celebrate the anniversary of Francis’ death (in 1226) it is often said to be Francis embracing the Lateran and offering homage to the mother of all churches, and acknowledging the authority of the pope, whose authorization he had come seeking. 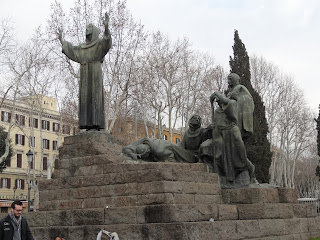 Yet when I saw it in February I could not help thinking that it represented a subtle plea of Francis before the pomp and finery of the Roman Church of his day (and ours) to change.

Francis was not a vocal critic of the opulence of the Papacy, though I wonder what he really thought. For, I believe, that his life and his example, and the rule he had written based on the Gospels are unspoken critiques.

Francis respected the pope and all priests; he not only rebuilt fallen-down churches but he insisted that churches be clean and the vessels and altar cloths be worthy of the God who became human in Jesus and is present in the Eucharist.

But the opulence of the popes of his day was so much in contrast with his desire to be with the marginalized, the powerless, the poor of his day.

And so today, as Pope Francis sits on the bishop of Rome’s chair, I pray that he vision of “a poor Church, a Church for the poor,” may become a reality as “a Church of the poor.” where the poor have a privileged place and where we begin to see the world from the perspective of Christ who became poor for our sake and preached “Good News for the Poor.”

Posted by John (Juancito) Donaghy at 8:34 AM No comments:

Be praised, My Lord, through Sister Water;
she is very useful, and humble, and precious, and pure.
St. Francis, Canticle of Creation

In much of the world, people do not have access to clean water. There are also places where people have to walk miles to get water, often from a polluted source.

In the parish of Dulce Nombre de María in Honduras, about half the communities do not have water projects. Some get their water from a source by means of rubber hoses. Only two communities have potable water that you can drink from the tap.

This year I hope to begin to work with the people in the communities to see what we can do to provide water.

Then they can really praise the Lord for Sister Water.

Posted by John (Juancito) Donaghy at 9:22 AM No comments:

St. Francis, Pope Francis, and me